Planted three mines successfully in Garden. One engine failed 45 minutes from Garden and trip was completed on three engines.  Weather 5-10 over France stormy on return.

Note :There is no mention in the squadron ORB of a fighter encounter, however the crew flight engineer Sergeant John Windle’s Log Book records an encounter.

Crew passed through heavy front on way to the target. W/V were in the region of 40mph. Cloud was encountered over route, but target area was clear but hazy.  TI markers were bombed.  Fires were well concentrated around markers and a good prang is claimed. Heavy flak was reported above and below and the target ringed with searchlights. obviously operating with fighters which were numerous.  Bombed 15,500ft.

Bombed from 15000ft. This aircraft reported haze over the entire route and target which made identification impossible. TI Reds were bombed. Four minutes after bombing our aircraft was attacked by a JU88. The enemy aircraft was seen but fire held as it could not be established in the fighter was a friendly Wellington.  Dropping to the rear the enemy fighter came in for a stern attack.

It was then identified and the rear gunner gave the pilot directions to corkscrew.  The enemies burst failed to hit our machine but four members of our crew saw our tracer hit the JU88. No claim was made however. Flak was described as ineffective.  Searchlight estimated at about 20 but not troublesome. 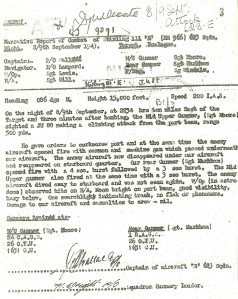 Bombed from 5000ft.  This aircraft also reported the target was covered by a mass of thick brown cloud.  Green TI Markers were bombed.  One large intense fire was observed in the SW of  corner of the target.

Target bombed from 13,500ft on Green TI Markers. One large fire and a lot of H/E was seen close to the TI’s.

Bombed from a height of 16000ft on Green TI Markers. Pilot reports seeing a mass of concentrated fires and much smoke. The fires were visible from the enemy coast of the return route.

There is no mention of this encounter in the ORB.

Combat Report records the encounter with the FW190 September 22nd 1943

This aircraft bombed from 15,500ft on Green TI Markers.  Visibility was good with no cloud.  One very large fire was seen in the southern part of the target area. The crew reported what appeared to be artificial  fires scattered throughout area.  They think they may have been used to outline the aircraft against the night sky.

Reported low cloud over target but reported seeing explosions around Red TI Markers. Arrived early  and saw one Green TI Marker but stood off just south of target, saw a Red TI go down so bombed it.  Ground detail could not be seen. Red TI seemed OK for position and timing.

The aircraft was hit by barrage flak either over the target area or on leaving, reports differ. Three of the crew managed to parachute to safety before the aircraft crashed  into a 1,200ft high  forested  hill called “Hunderbrunnen”  3 miles NW of Edenkoben, Germany at 21.45hrs. The five fatalities are buried in the Rheinberg War Cemetery.

The crews navigator Flying Officer N Lampard recalls the events of that night;

I was sitting at the navigators table when we were hit. A flak burst exploded directly under the nose section, hundreds of holes appeared in the fuselage around the bomb aimer’s position. A gale of icy wind swept along the fuselage, it was obvious immediately that the aircraft damaged badly. John, the skipper gave the order to bail-out, then Ron in the bomb aimers position reported over the intercom that the front hatch was jammed.  I went forward to try and help, the force of the explosion from the flak had buckled the hatch tight. Unable to open the hatch I returned to the cockpit where I informed John that the hatch was jammed. I stood slightly behind John and the Canadian “second Dickie” waiting for the inevitable crash.  I regain consciousness lying in a wooded area littered with the burning remains of my aircraft.  I was in considerable pain, however my thoughts were clear, I realized that I should try and move to cover as I was worried about explosions.  After what seemed like hours, I managed to drag myself to an isolated farm house. With my condition worsening, I decided to knock on the door for assistance. The residents took me in and treated my wounds. I was not fully aware of the extent of my injuries but it was obvious I needed urgent medical treatment. Within a short time a German lorry arrived, German troops unceremoniously lifted me onto the back of the truck. I was immediately taken to a local German hospital where I received attention. I have vague recollection of seeing my flight engineer John Windle in the back of the lorry.” 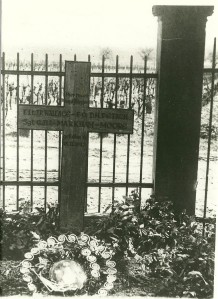 The original grave of John Wallace and crew.